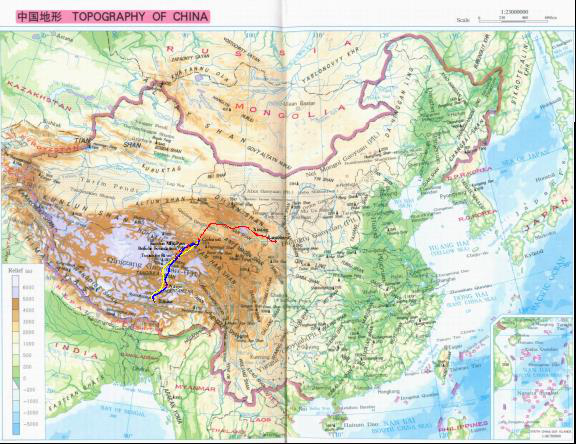 Figure 1.  Topography of China and the field excursion Route

On the Qinghai-Tibet Plateau, permafrost covers 1,5 million km2, 75% of the permafrost region in China. This field excursion is mainly for visiting permafrost phenomenon, such as pingo, rock glacier, gelifluction, et al., from Golmud to the Beiluhe Field Station. The distance is about 320 km. And also, most permafrost engineering measures used in road construction can be seen along the Qinghai-Tibet Railway and highway, including some used for the old highway (the serving condition is not so good), and for the new railway (mainly constructed with pre-cooling roadbeds). The highway will be re-constructed, with the standard of express highway. The railway runs with a speed of 100 km/h, and also will be changed to be electronically powered one. For the reason of the high altitude, some people can decide only to visit the section between Golmud and the Beiluhe Station. All the phenomenon and engineering things related to permafrost can be seen within this section and in the experimental field in Beiluhe. However, all participants are welcomed to visit Lhasa, which is called sunshine city. You can well experience the Tibetan culture and visit many historical sites.

The field trip of Eastern Qinghai-Tibet Plateau (EQTP) is designed to pass through the eastern part of Qinghai-Tibet Plateau from Xi’ning (capital city of Qinghai province) to Yushu along the National Highway G214. The distance is about 800km. Permafrost is dominantly developed in the areas where the altitude is above 4200m a.s.l. , and permafrost extent along the trip line is about 360km(as seen in Figure 2). Gonghe-Yushu Expressway, which was the first expressway constructed in permafrost region on the plateau, has been constructed paralleling to G214. Some new measurements were applied in the construction of roadbed in permafrost section. The expressway will be always in our trip sight. At the middle point of the field trip, you can visit the Observation Base for Permafrost Research(OBPR) . OBPR consists of a special field test sites where many test programs are being carried out. In the field test site, we will get a good view of engineering tests, such as permafrost roadbeds with various structures, pile foundation, and so on. Some geocryology landforms, such as frost mound, thermokarst lake, will be viewed in the trip. The destination of the trip is Yushu city, a Tibetan custom place.

Figure 2 Field trip Route and permafrost distribution along the line

Permafrost in Northeastern China belongs to high-latitude permafrost, different from the high-altitude one on the Qinghai-Tibet Plateau. It is warm, thin and sensitive to climate warming and human activities. It is degrading, for example, its area decreases from the original 390, 000 km2 in the 1970s to the present 260, 000 km2.

This NNEC field trip plans to spend 6 days, which includes 2-day flight (about 3,700 km from Lanzhou to Harbin, then to Jiagedaqi) and 4-day visit at some field monitoring sites about permafrost environment and permafrost engineering from Jiagedaqi, near the southern limit of permafrost, to the Chinese northernmost Mo’he city by bus. They include the Gen’he permafrost environmental monitoring site for various factors like snow cover, forest, shrub and meadow affecting permafrost evolution, the China-Russia Crude Oil Pipeline (CRCOP) monitoring sites for evaluating the influence of warm buried oil pipeline on the underlying permafrost at several sites driving along the Jiagedaqi-Mo’he highway (JMH) in the boreal forest (about at JMH 7km, JMH 33km, JMH 94km, JMH 104, JMH 167), visiting specific permafrost landscapes and phenomenon along the JMH, monitoring sites of permafrost response to the urbanization of Chinese northernmost Mo’he city, permafrost degradation sites along the Mo’he to the Chinese North Pole Village express highway, permafrost degradation sites at the Mo’he airport. After the Mo’he visit, all the participants will go back at Mo’he airport, finishing our NNEC field trip. 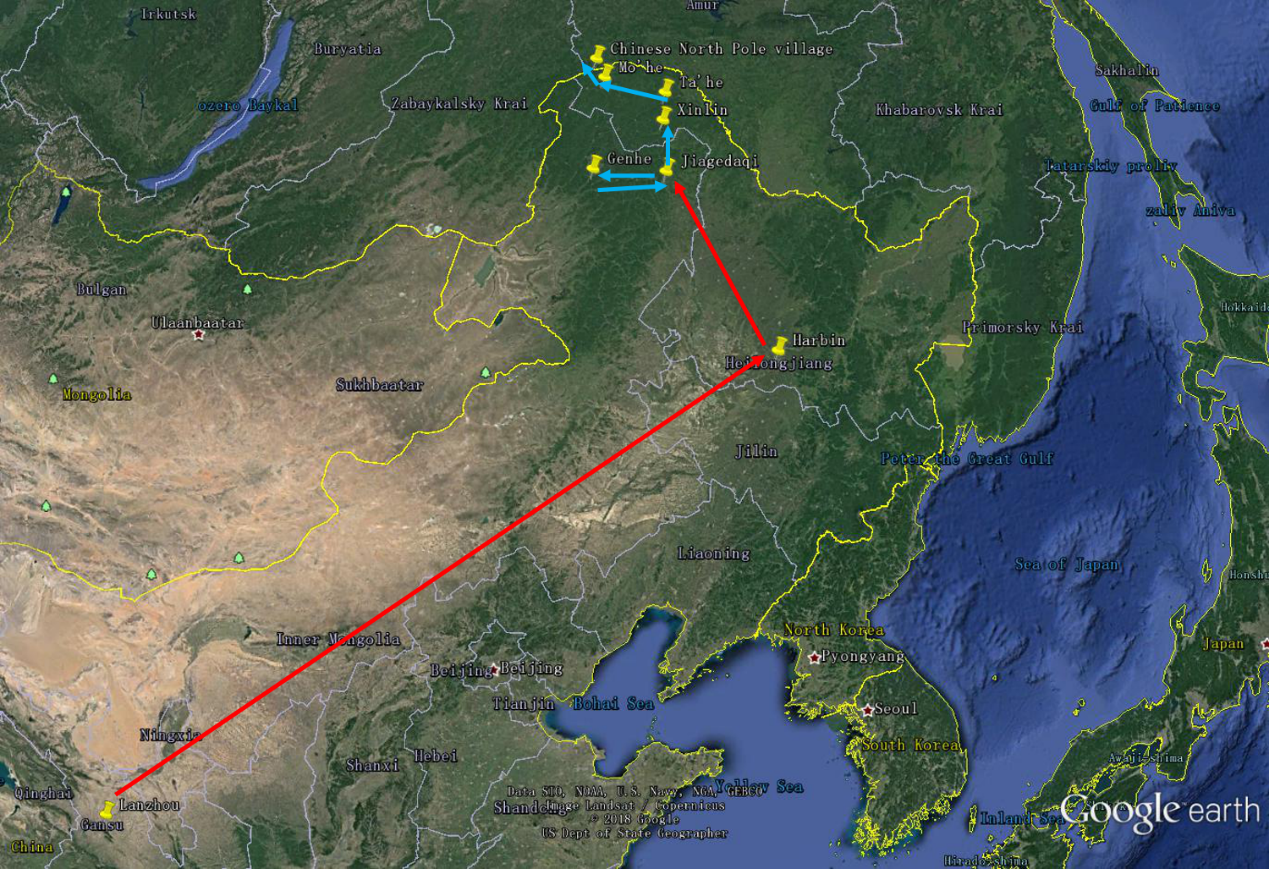 The Qilian Mountains also known as Richthofen Range, together with the Altyn-Tagh also known as Nan Shan, as it is to the south of Hexi Corridor, is a northern outlier of the Kunlun Mountains, forming the border between Qinghai and the Gansu provinces of northern China. The range stretches from the south of Dunhuang some 800 km to the southeast, forming the northeastern escarpment of the Qinghai-Tibet Plateau and the southwestern border of the Hexi Corridor. Most of the mountain is more than 4,000m high. The highest peak is Gangzewujie Peak, whose elevation is 5,808m. The Qilian mountains are the source of numerous, mostly small, rivers and creeks that flow northeast, enabling irrigated agriculture in the Hexi Corridor (Gansu Corridor) communities, and eventually disappearing in the Alashan Desert.

In the whole regions, half of the land are occupied by permafrost. In this region, the best known and largest of these streams is the Heihe River. This field excursion is mainly for visiting permafrost phenomenon, such as hummock, frost mound, polygon, thermokarst, et al., from EBo to the Ye Niugou Field Station. The distance is about 260 km. The Heihe River Basin is located on the northern flank of the Qilian Mountains. Measured mean annual air temperatures in the upper reaches of Heihe River basin range from 6°C to -10°C. It has been built an observation network with 14 boreholes was established from 2011 until now. The in situ measurements indicated mean annual air temperature that ranged from −5.2 to −2.3°C at the monitored elevation range of ∼3,600–4,150 m, and mean annual ground surface temperature that ranged from −1.3 to 1.7°C during 2013–2017. The mean annual ground temperature at 16- to 18-m depth ranged from −1.71∘C on the high (>4,000 m above sea level) north facing slope to about 0-C around areas near the lower limit of permafrost. Active layer thickness at the monitored sites varied significantly with the range of 0.77–4.90 m during 2011–2017, and maximum frozen depth in seasonally frozen ground was about 5 m. Permafrost thickness was between ∼136 m and less than 10 m. However, all participants are welcomed to visit other spots in the field trip (Figure 4). You can well experience the multi-culture and visit many historical sites. 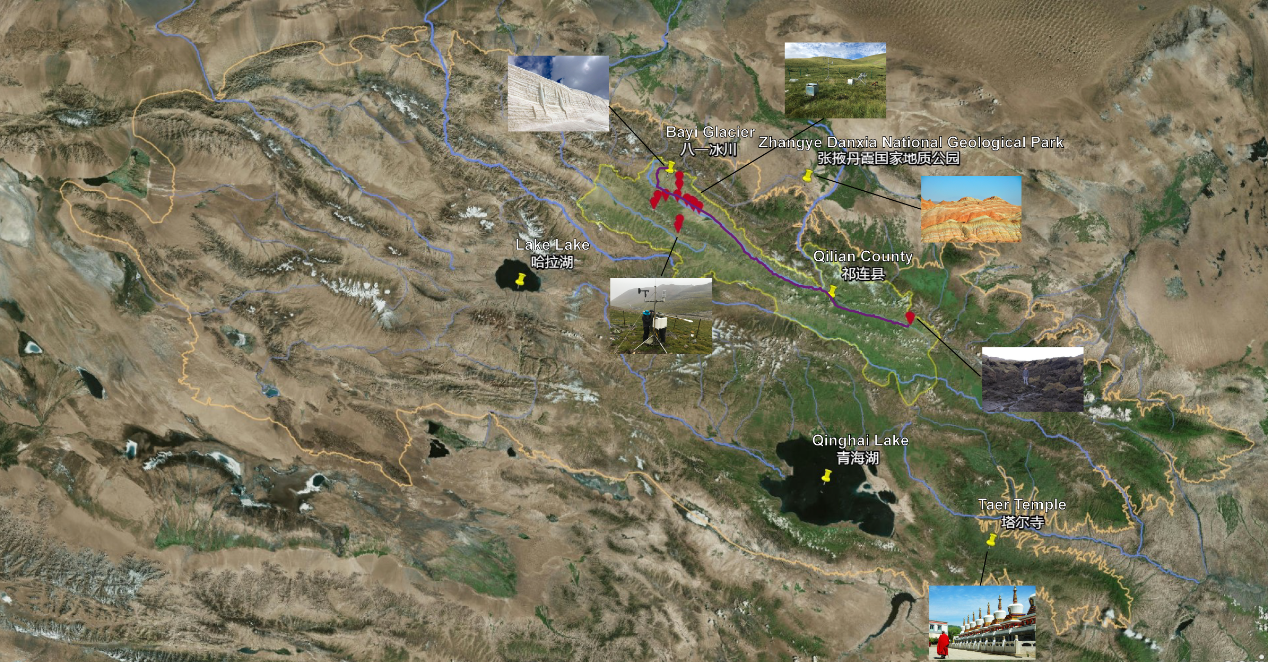 As an area rich in past periglacial phenomena, the Ordos Loess Plateau (OLP), Inner Mongolia is crucial for studying past permafrost during the last 50 ka. It is located between the northern boundary of the Central Loess Plateau at latitudes 38°-39° N; 1000-1500 m a. s. l. (Figure 5). It is a desert and steppe region of 90,000 km2. It is a bajada that has levelled completely the pre-existing relief by surface runoff. Since its formation, the planation surface (ca. 3.7 Ma BP) has been covered by thick aeolian deposits. During the Local LGM (ca. 30-18 ka BP), OLP may have experienced mean annual air temperatures at least 13°C lower than today (7°C). The climate would have been more continental and desert-like than today.

The 4-day fieldtrip to the OLP includes stops for many periglacial phenomena since the Late Pleistocene (Figure 5). Along the trip, we can see fissures filled with silty sand form wedge-like structures that penetrate both Tertiary-age bedrock and Quaternary-age sediments. The wedges reflect thermal-contraction-cracking of either permafrost or deeply-frozen ground during the Late Pleistocene and early Holocene. Extensive occurrences of cryoturbations of varied ages will also been observed.